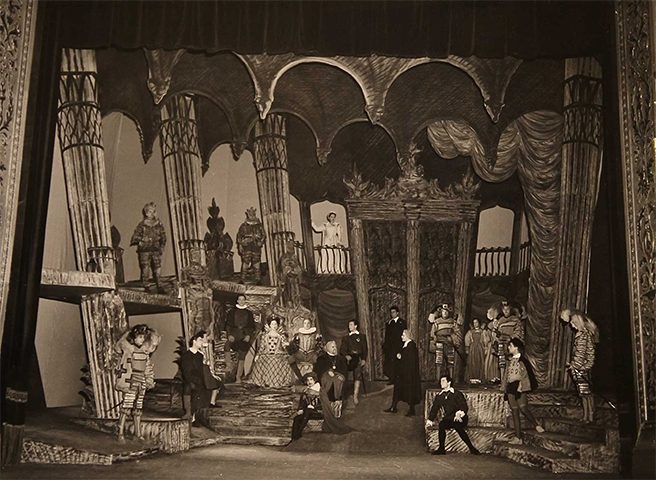 This was the first performance at Teatro d’Arte Italiano, founded and directed by Luigi Squarzina and Vittorio Gassman. The text was translated and staged by Squarzina, in its unabridged version for the first time in Italy. The show included copious Director’s Notes recounting the critical reflection and invention underlying the production. The point of the operation was thus clarified by Squarzina himself: “To restore integrity to tragedy: breaking from a centuries-old use of mutilations or misinterpreted divulgations, the text had to emerge not only in its vastness, but in its language, in its natural habitat, in its rhythm, in its structure, so that character, released from Romantic and Post-romantic clichés, could rediscover its coherent function as the mirror of a crisis-stricken age”. The production authoritatively stated the concept of direction, in a show that qualified as actor theatre. Squarzina framed the production within the staging rules of Elizabethan theatre, retracing the author’s thinking and the historical context. The show sparked the unbridled enthusiasm of its audiences, which attended every evening in numbers greater than those at the Eliseo theatre for its rival show, Chekhov’s Three Sisters, staged by Luchino Visconti.