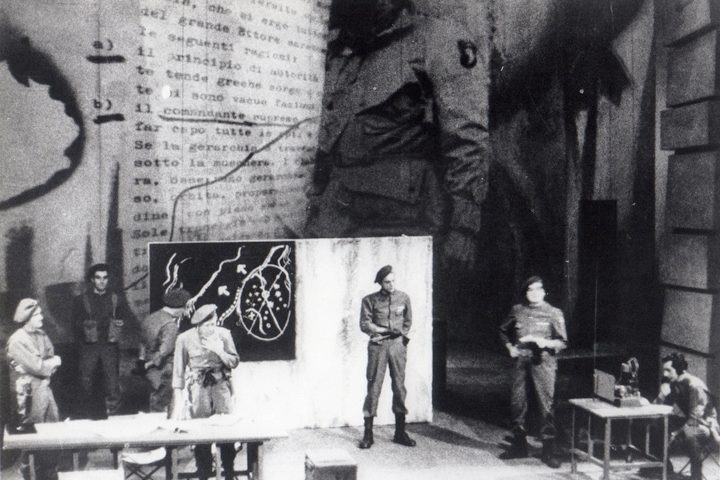 With this reinterpretation of Shakespeare, which aims to reference “the experiences we all have lived, the dangers we all run,” Squarzina once again makes Shakespeare our contemporary. Here, he reaches the peak of accuracy and consistency, proposing a theatre of civil and social commitment, and “inviting audiences to leave behind their passivity and to seek, in the play, not only and not truly an evening’s pleasure, but help for understanding and living”.

The director offers a dual modernisation of Shakespeare’s text. A modernisation of the language thanks to a translation that, while remaining essentially faithful to the text, modernises it with neologisms and slang forms from the spoken language. Then, there is visual modernisation related to the World War: Greek heroes wear khaki uniforms like American generals, while Trojan ones are dressed in grey/green, toting guns and assault rifles. Further, Elena wears a white fox cape, Paris a suit and rapier, Priam a nightgown, and Cressida a bikini; Achilles flirts with Patroclus in a trailer, Troilus is an aviation pilot, Thersites is a journalist/paparazzo with cameras draped around his neck, and Calchas is a scientist who has gone over to the enemy. Thus is Shakespeare’s savage satire about the Trojan fully understood: as a war for an operetta.