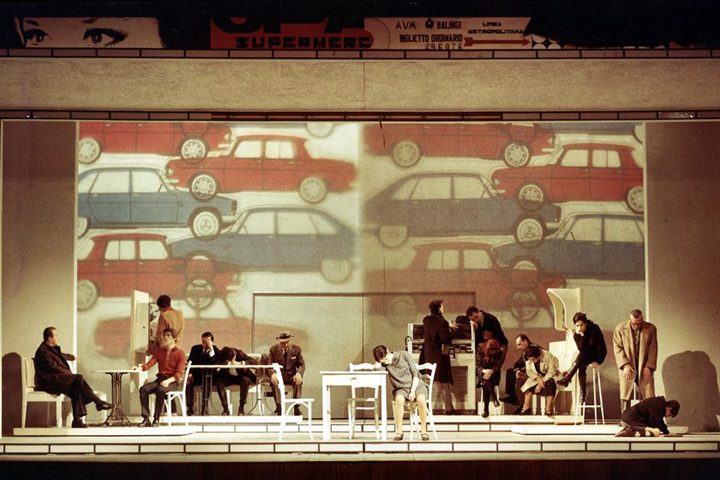 Written by Squarzina between 1961 and 1963, this play was a major novelty on his artistic journey, in which he abruptly changed direction in form and style from his previous output. Namely, he offered a “precise upgrade of the expressive modules,” taking account of the experimentations taking place in the arts and in literature, as well as the expressive requirements of the theatrical avant-garde related to the most poignant themes of the ‘60s, such as Communism, mass civilization, advertising, and the culture industry.

Challenging the most traditional critics, he implemented a dangerous artistic and cultural operation. He wrote text without punctuation or stage directions, as these limit the strength of the word, and he experimented with a language unprecedented for the Italian stage in order to highlight the banality and irrationality of everyday language, which led to the “dissolution of meanings of everyday life during those years, thus reflecting their alienation.” The author defined the work as an avant-garde parodizing critic with the means inherent to the avant-garde; in reality, Pirandello and Ionesco can be found in it, as well as the indignation of the man of culture towards the commercialization of culture and the arrogance of pseudo-revolutionary intellectuality.

Although the comedy received high praise from critics and was honoured with the 1966 Premio IDI, it resulted in an unbelievable trial for religious defamation. Squarzina ended up being cleared of all charges, because his work not only does not offend religion, but is in fact rich in morality.