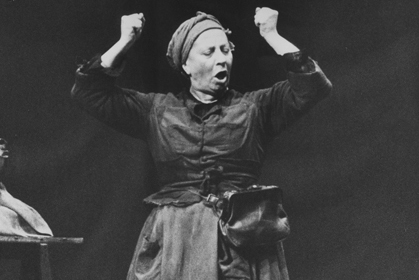 Squarzina was able to stage Mother Courage only after the end of Teatro Piccolo’s monopoly on Brecht’s works and upon approval from the dramatist’s wife, Helen Weigel, and his publisher Suhrkamp Verlag.

Its point of reference was the famous Berlin edition of 1949, and it expressed on stage the epic and Brechtian estrangement from acting focused on the character’s contradictions, with a set design based on a revolving platform, noisy and visible just like the scaffolding onto which the projectors were fastened, highlighting the theatrical façade.

But since Squarzina was not a “very conforming Brechtian” and found natural affinities between the “critical” module of performance at Genoa’s Teatro Stabile and the “epic” ideal of the actor, he introduced a sort of contaminatio, so as to show the “components of the world of thoughts and facts that Mother Courage is – perhaps to the detriment, here and there, of an epic homogeneity (in a Brechtian sense) that is too orthodox (hence non-Brechtian).” Ultimately, it was an epic theatre exposed to the elaboration of critical theatre. Madre Courage, magari a scapito, qua e là, di una omogeneità epica (in senso brechtiano) troppo ortodossa (dunque non-brechtiana)”. In definitiva un teatro epico sottoposto all’elaborazione del teatro critico.

The critics recognised the play’s extraordinary importance, while audiences welcomed it with monumental enthusiasm throughout its long tour.