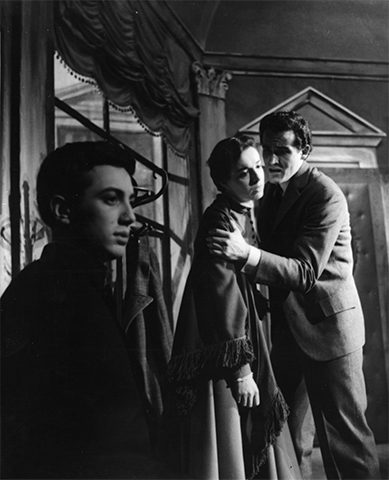 Written by Squarzina and directed by Gassman, Tre Quarti di Luna was honoured with the 1953 Saint Vincent Prize for dramatic innovation, garnering resounding success with both audiences and critics who were impressed by its dramatic charge and tension from the first scene to last, as well as with the mastery of the action montages, the configuration of characters, the powerful language, the skilled dosing of progressions, and the refined technique of movements and plot twists. An acerbic yet authentic comedy, it makes a clear denouncement while maintaining an artistic vision all the while. The play – which holds the Gentile educational reform as the Italian twentieth century’s ideological and moral core – stresses the need for the teaching relationship to be free of ideological preconceptions and of factionalisms, while conversely emphasizing the pupils’ need for cultural autonomy. Tre Quarti di Luna [“Three-Quarter Moon”] marked Luca Ronconi’s acting debut and the end of the Squarzina-Gassman partnership. Tre quarti di luna marks Luca Ronconi’s debut as an actor and the end of the Squarzina-Gassman partnership.