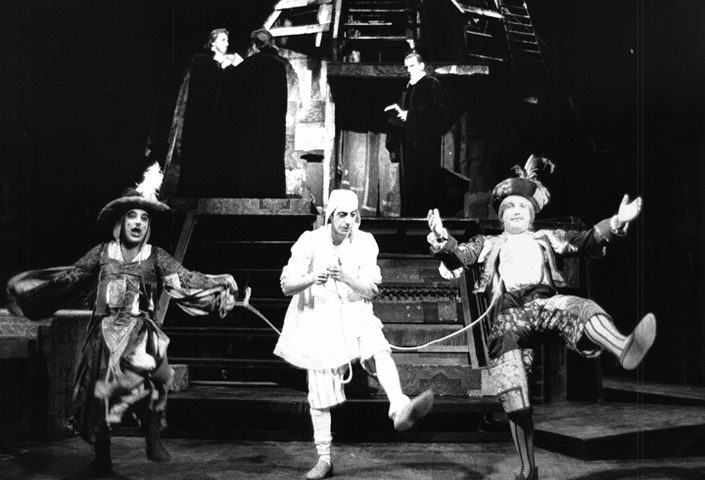 Squarzina staged three editions of this play: in 1957, 1976 and 1979, following different interpretations. Starting from the very first edition, he oversaw the translation, which was considered exquisite, modern, brilliant, and theatrically sound.

In the first edition Squarzina read in the Shakespearian comedy the hypocrisy of censorship, which was in force at the time, with a light and pleasant direction, adhering to the spirit of drama – sober and clear, organic and elegant –, and paying a great homage to culture.

In order to determine the comedy’s cultural and political motivations and its theatrical connotations in the field of Elizabethan theatre, and to understand the possible connections with our own problems in the 1970s, he accompanied the production with university lectures, dedicating to Shakespeare a single-theme course in 1976-77. Squarzina then accompanied the successful encore performances of Misura per Misura in Italian theatres with the essay entitled “Le strutture del teatro elisabettiano-giacobeo” (“The structures of Elizabethan-Jacobean theatre,” 1978).

The production of the second edition, and the observations developed through the single-theme course and in the essay, can be read as references to our national history in the final quarter of the last century. And this is the essential merit of Squarzina’s innovative reading of a great classic: the manifold abuse of power, the hypocrisy of virtue and purity, the unmaking of values and the confusion of moral languages, and iniquity disguised as justice.

The production, although clearly pointing out connections with the political, social and cultural history of England, was projected towards our own time, so much so that “Squarzina’s Shakespeare becomes contemporary... through a reading as humble as it is piercing, made, though, with the vigilant conscience of a modern man”: a deeply examined and head-on reading of modernity, entirely civil (thus political, but not politicised).